The initial willingness from Klay Thompson, for me, spoke to his character and the possibility that he may in fact be the alleged father of Bryce Baez. What intrigued me was how the shooting guard never once questioned if the claim that Bryce Baez may be his son, was genuine. It affected him so much that his game on the court at the start of the NBA season with the Golden State Warriors, was noticeably off. While everyone questioned if this awkward start was due to his highly anticipated return to the court after battling several injuries, behind the scenes, we knew the truth. We thought we met the real Klay.

Now, not so much. At the height of hope, Bryce and the team had every expectation that they would finally be reunited and begin to unpack the years of unanswered questions and longing. While Bryce lived a good life in Spain, his adoptive parents and his carefree life there were all he knew. He moved to the United States to pursue his dream to be drafted into the NBA. Now living in Chicago, he plays for his college’s basketball team, and let me tell you, he is putting up some good numbers!

Having the rug pulled under him at the very start of pursuing his dreams has caused him to question his identity. (I know I would if I found out that my dad was a multi-millionaire!) Though you may not see this portrayed on Bryce’s TikTok, every interaction with him becomes more and more difficult because rejection has begun to set in. Not only the rejection he felt about being adopted and the fact that his parents kept it from him, but also the fact that Klay seems to be having second thoughts. 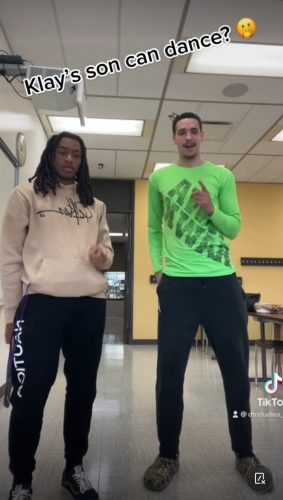 This has caused me to ask some questions: Is Klay Thompson backtracking? Did someone on his team step into this? For instance, did he hire lawyers? He would not be the first high profile basketball player with a paternity scandal. In 2013, Michael Jordan was hit with a paternity suit over an alleged love child. Does Thompson have plans to have Bryce or Lizbeth sign nondisclosure agreements? Heck, does Thompson have other children out there?? Will Bryce now have an endless supply of front row tickets to Warriors games? At this point, we have not spoken to anyone in the industry, but bloggers are talking about running with it. Stay tuned.