Aaron Hernandez did not have any trace of illegal drugs in his system at the time he had committed suicide, this is according to new reports by WCBV. Despite the suspicions of cover up play at foot, he was pronounced dead in his prison cell on the 19th of April, 2017. It was claimed that he had hanged himself with the bedsheet cover of his prison bed influenced by a chemical imbalances in his body. It’s rather conspicuous that he got himself a bit of that “high” in his confinement. 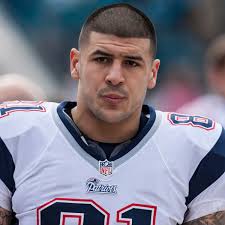 An update from WCBV on the toxicology tests stated, “there was no trace of synthetic marijuana in Hernandez’s system when he had died,” despite previous reports that claimed there was. Before his death in 2017, he was a world class athlete who received the largest signing bonus ever given to an NFL player. A scorching sum off $12.5 million, an unusual amount of cash if you ask me, the sort that went a long way to giving him the kind of life most of us could ever only dream about. “Was a life sentence enough reason for him to snuff out his flame?”

Even seeming to have had it all, a wife and new born baby at the time, he didn’t seem to have a firm grip on his life affairs. He was convicted for murder in the year 2015 and was sentenced to imprisonment, a rather interesting fact pertaining to his death is that Hernandez allegedly drew an unfinished pyramid similar to what’s on the back of the U.S dollars on the wall IN BLOOD, written below it, also in blood, was the word “Illuminati” all in caps. Aaron didn’t stop there, he left behind three suicide notes for his fiancé, his daughter and his attorney. According to WCBV, in one of those letters he wrote he was entering a “timeless realm” and he would see then in heaven. Such isn’t usually the case, in a suicide.