Here are 5 reasons why NBA star Klay Thompson and Bryce Baez would make a great father- son duo!     They have similar interests. They both love basketball. Bryce plays for his college team in Chicago and Klay plays for the Golden State Warriors. Also, Klay’s dad Mychal Thompson played for the Portland Trail Blazers and the Los Angeles Lakers. It runs in the … END_OF_DOCUMENT_TOKEN_TO_BE_REPLACED 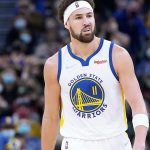 The initial willingness from Klay Thompson, for me, spoke to his character and the possibility that he may in fact be the alleged father of Bryce Baez. What intrigued me was how the shooting guard never once questioned if the claim that Bryce Baez may be his son, was genuine. It affected him so much that his game on the court at the start of the NBA season with the Golden State … END_OF_DOCUMENT_TOKEN_TO_BE_REPLACED